THE GOLDEN KINGDOM OF COLCHIS 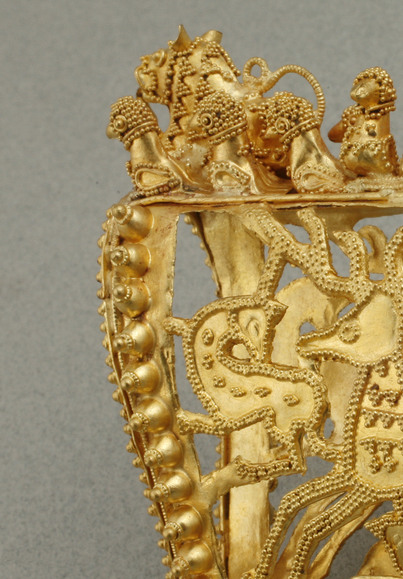 Colchis was the first definitive political formation created by the ancestors of modern Georgians. It emerged in the lands of western Georgia (while another ancient Georgian kingdom, that of Iberia, was established in eastern Georgia). For the Greeks, Colchis was a fabulous land of gold and magic. Scholars often refer to the renowned myth of the Argonauts as evidence for the wealth and fame of ancient Colchis. As is well known, the Argonauts were mythical Greek heroes who united so as to take the Golden Fleece from the King of Colchis.

The Golden Fleece is the most famous symbol of ancient Colchis. This great treasure had a tragic story, which began when Athamas, the King of Orchomenus in Beotia (region of Greece), married the Greek goddess Nephele and fathered two children with her – Phrixus and Helle. They lived happily until King Athamas fell in love with a woman whose name was Ino. The insulted goddess left Athamas, and her rage caused a great drought in the lands of Orchomenus. Ino hated Athamas’ children, and during this terrible drought she seized her chance. She thought that she could finally be free of them. Thus, the wicked Ino conspired against Nephele’s children: she told Athamas that the only way to stop this natural disaster was to sacrifice his own blood – namely that of his children. Athamas’ mind was darkened, and he decided to slay his own children in order to stop the drought, but their mother Nephele sent a winged ram with a golden fleece to rescue them. The ram took them from Beotia. During their flight, Helle fell from the ram and drowned in the sea (the place where she drowned was named Hellespont after her, and is now modern Bosporus), while the flying ram took Phrixus to the eastern shores of the Black Sea – to the golden kingdom of Colchis. Here Phrixus sacrificed the golden ram to Poseidon, and settled at the court of the Colchian king – Aeetes. The Golden Fleece of the winged ram was hung on a huge oak tree in the forest of Ares – the God of war. The Fleece was guarded by a fearsome dragon and fire-breathing bulls. The myth recounts that it became a major treasure of the Colchian kingdom. 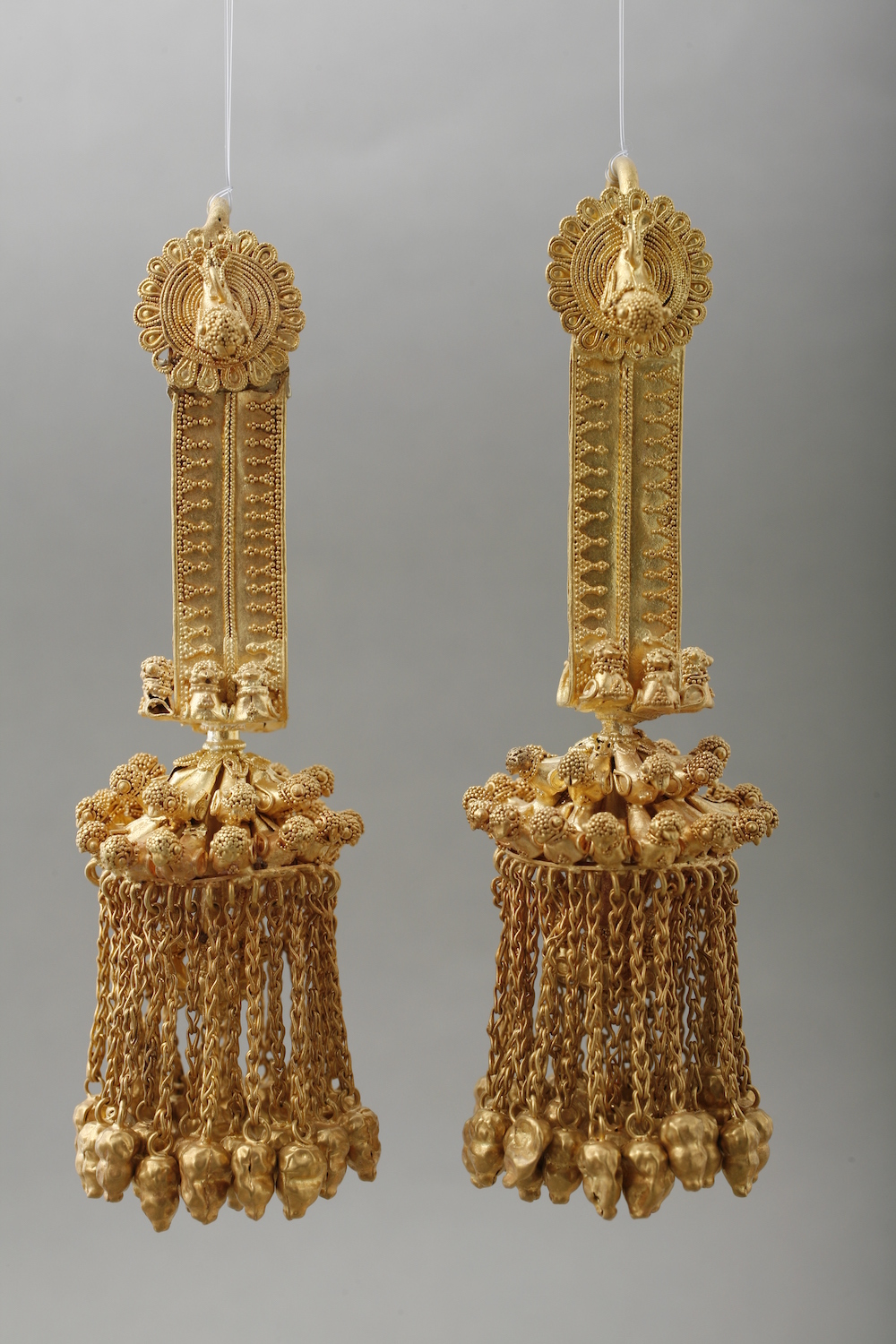 King Aeetes was not the only one who was captivated by the beauty and magic of the Golden Fleece. Many other kings had their eyes on this fabulous treasure of the Colchian kingdom. Meanwhile in Thessaly, another Greek region, after the death of Cretheus the king of Locus, his half-brother Peleus unlawfully occupied the throne and slaughtered all the descendants of Cretheus apart from Jason, whom he spared because of his mother’s pleas. Years later, Jason made his claim to the throne. Peleus asked him what he would do to claim back his father’s throne. Jason replied that he would bring the Golden Fleece from Colchis to Greece. Peleus agreed to give up the throne if Jason was able to fulfill his promise. Peleus easily gave his word since he was convinced that Jason could not survive such a dangerous expedition. Jason was determined to bring back the famous treasure from Colchis, and he began to gather a crew together. Many famous Greek heroes and warriors accepted the challenge and joined Jason’s cause. They built a boat and named it Argo, and so the members of this expedition became known as the Argonauts. Even Heracles became a member of the Argonauts. After a dangerous trip and many mortal setbacks, the Argonauts landed in the kingdom of Colchis. The mighty King Aeetes greeted the guests. Jason told the king about his intentions. The King agreed to give him the Golden Fleece if Jason could overcome all the ordeals that confronted him. The King knew that Jason would never make it because of the magic that guarded the fleece. However, the events had an unexpected turn. King Aeetes had a beautiful daughter – Medea – who was trained in both the old and new methods of magic. Medea fell in love with this handsome foreigner, and she taught him how to defeat all the superhuman guardians of the Fleece. With the help of Medea, Jason overcame all the terrible exploits, took the Golden Fleece and escaped Colchis with his lover. Enraged, Aeetes sent his son after them, but the latter was killed in a fight while chasing the Argonauts. Consequently, the Golden Fleece was lost to Colchis. The myth of the Golden Fleece and the Argonauts has enjoyed immense popularity both in ancient times as well as in modern culture. Perhaps you recall the 1963 film “The Argonauts” directed by Don Chaffey, which became a very popular movie at that time. 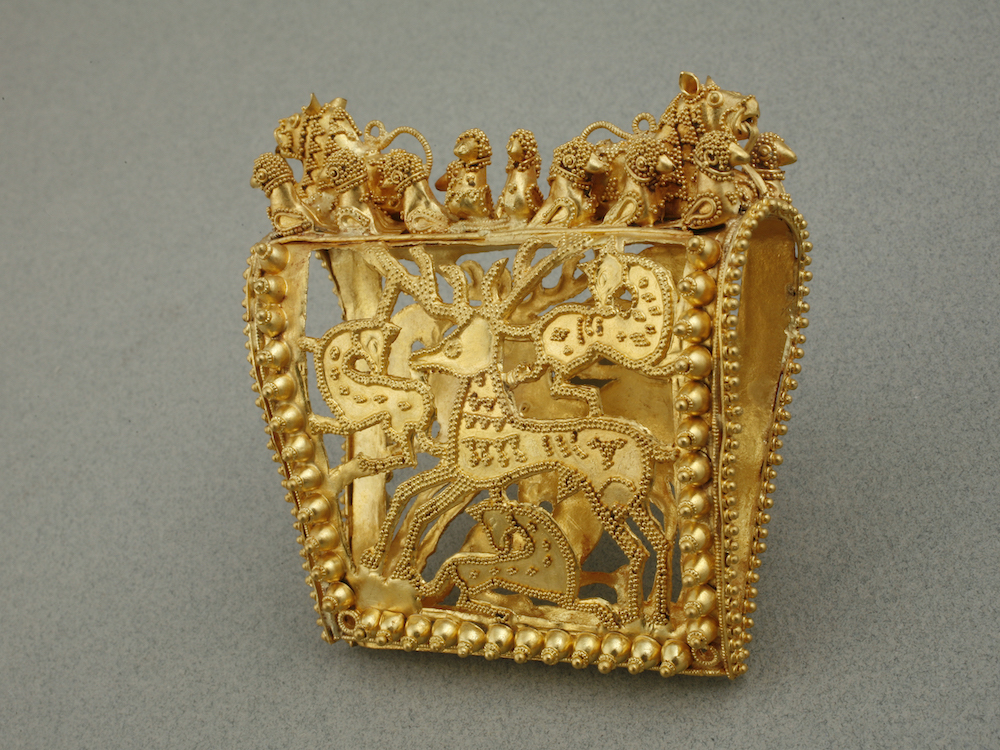 Some scholars believe that the legend of the Golden Fleece may refer to an actual ancient tradition in western Georgia: from time immemorial, Georgians filtered gold from rivers using sheep fleeces. They placed sheep fleeces in the rivers in order to collect flecks of gold that were carried downstream. It is hard to say whether this tradition lies behind the legend; however, the myth of the Golden Fleece certainly tells us how the ancient Greeks imagined Colchis.

The image of Colchis as a fabulous land of gold and magic endured for a long time. Many scholars thought that Colchis was already a powerful kingdom in the second millennium B.C., and the myth of the Argonauts actually described a historical expedition of the Greeks to the eastern shores of the Black Sea. Clearly, we should be cautious to trust ancient myths and legends, but we can trust archeology. And archeology has achieved much in investigating the distant past of western Georgia. Archeologists discovered numerous burial sites dating back to the second millennium B.C. possessing abundant agricultural artifacts. The countless agricultural tools puzzled the specialists who studied these burial sites. These archeological discoveries revealed highly developed agriculture and population growth in western Georgia during the second half of the second millennium B.C. As the excavations revealed, the ancestors of modern Georgians lived in wooden houses encircled by wooden walls and water-canals. They jointly cultivated the land. The collective effort in land-cultivation was always essential in the boggy lands of these areas – especially in the lowlands of western Georgia, which were always covered by dense forests and swampland (only the great labors organized by the Soviet government during the 1920-30s made it possible to drain this territory of swamp). It seems that during one thousand years the life-style of the inhabitants of western Georgia did not change that much. Ancient Greek, Roman, Byzantine, Turkish and European travelers described the western Georgian population as living in the forests in wooden cabins and towers hidden from outsiders’ eyes (this lifestyle survived into the first half of the twentieth century). 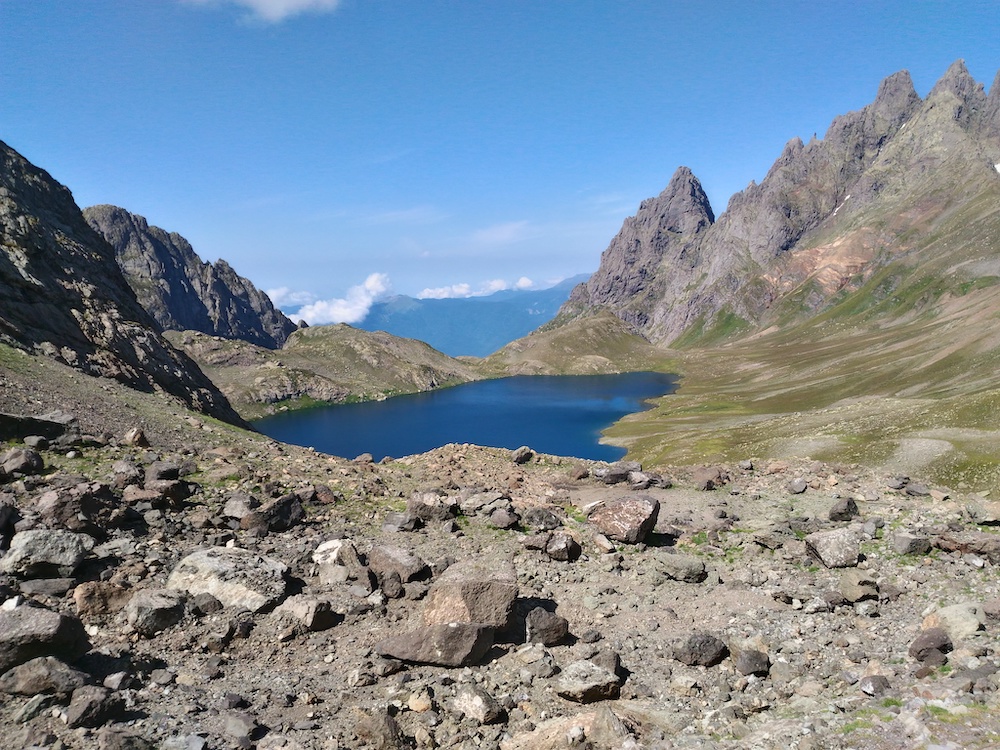 Mountains of Colchis (by Konstantine Baramia) 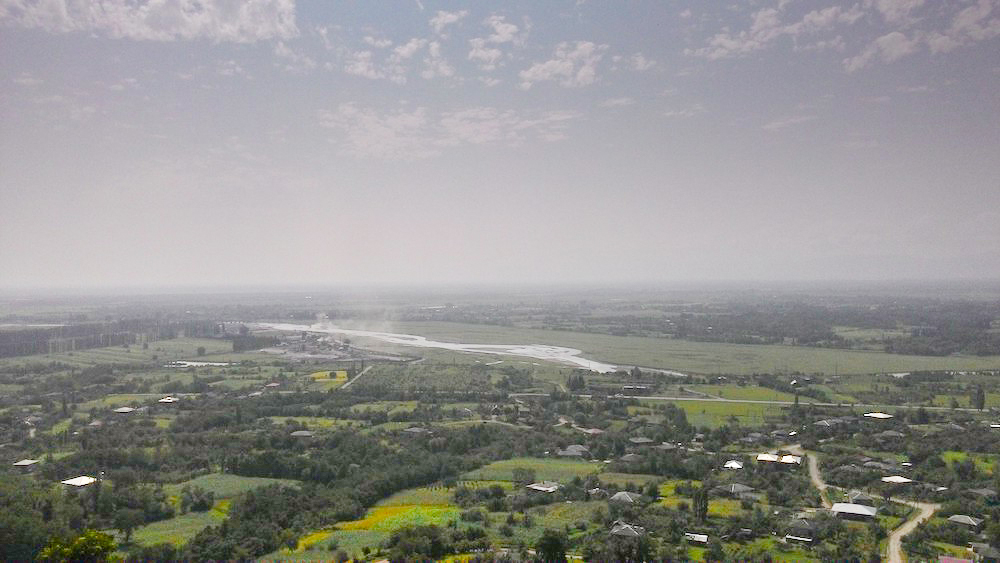 Lowlands of Colchis (by Konstantine Baramia)

As it would appear, the growth of the population and their material wealth generated some kind of political or military formation in the territory of western Georgia (scholars are unsure whether it was a centralized kingdom) which faced the Assyrians and Urartians. The center of ancient Colchis was in the Chorokhi Valley (the main part of the Chorokhi River is located on what is now the territory of modern Turkey). Afterwards, this center shifted towards the north, near the modern city of Kutaisi. Possibly this wealth and power of the Colchian confederation was reflected in ancient Greek sources. There is still much ongoing debate around the political and economic conditions in ancient Colchis. Hopefully, future investigations will reveal much more. The fall of ancient Colchis is associated with invasions by the ancient warrior tribe of Cimmerians from the north. Colchis was also weakened by constant rivalry with Urartu, and finally both Colchis and Urartu fell victim to the Cimmerians at the end of the eighth century B.C. In the sixth century B.C., Colchis revived. We know the names of some of the rulers of Colchis from that period: Akes from the fourth century B.C., legendary Kuji from the third century B.C., and Saulaces from the second century B.C.. At the same time the Colchians came into contact with Achaemenid Persia, which snatched its southern provinces, as well as the ancient Greeks, who were much more peaceful than the Persians.

From the sixth century B.C., Greek colonization of Georgia began. The ancient Greeks left their homeland to travel and explore the world – to find a new home for themselves. The Greeks sailed around the Mediterranean and the shores of the Black Sea; in so doing they came to the Colchian sea-coasts and brought Greek culture with them. They established several settlements and engaged in active interaction with the local inhabitants. These connections gave birth to a unique cultural mix – the convergence of Greek and local traditions. The Greek coastal communities were canals linking Colchis to Greek civilization. The Greek colonization, which was followed by Roman conquests in the first century B.C., brought about a large-scale spread of Greek and Roman culture throughout ancient Georgia. Archeological explorations of the ancient cities of Georgia such as Vani, Sairkhe, Bichvinta, Mtskheta, Uplistikhe and others, reveal the dazzling lives of the ancient Georgians who absorbed the lifestyles of the Greek and Roman elites. 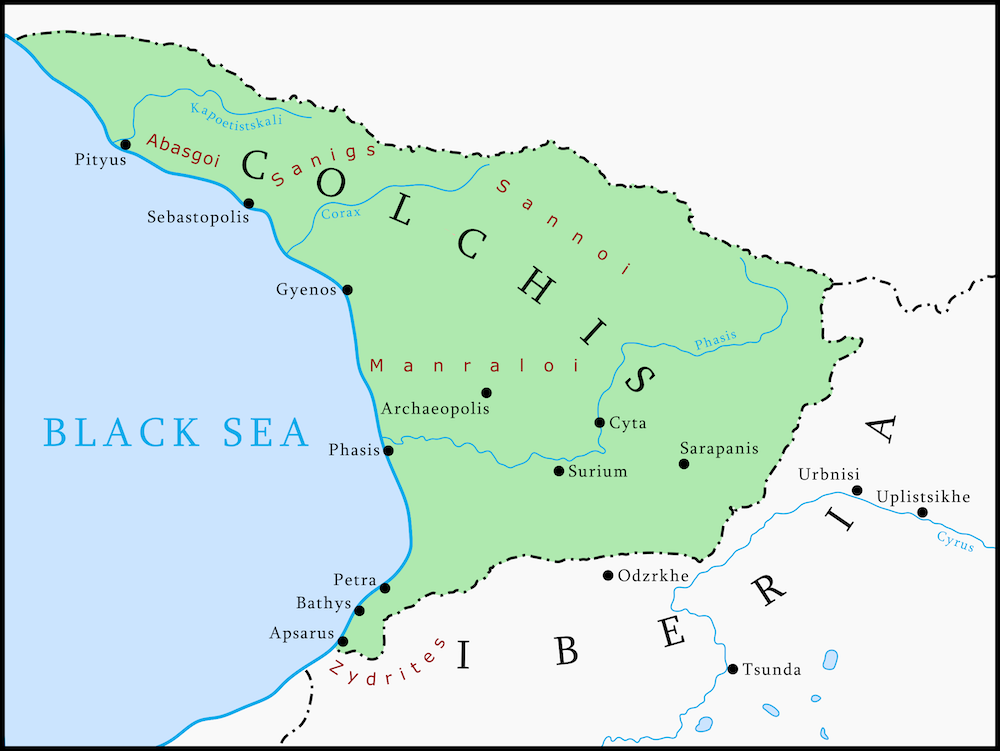 The might of Colchis came to an end when it was conquered by the King of Pontus, Mithridates VI (135-63 B.C.) in 83 B.C., and subsequently by the Romans led by the famous general and restless rival of Julius Caesar, Pompey the Great, who invaded western Georgia and conquered it in the middle of the first century B.C. From that time, western Georgia fell under the suzerainty of the Roman/Byzantine Empire until the end of the eighth century A.D., when a new medieval kingdom emerged in the lands of western Georgia.

THE FORTRESS AT PETRA (TSIKHISDZIRI) 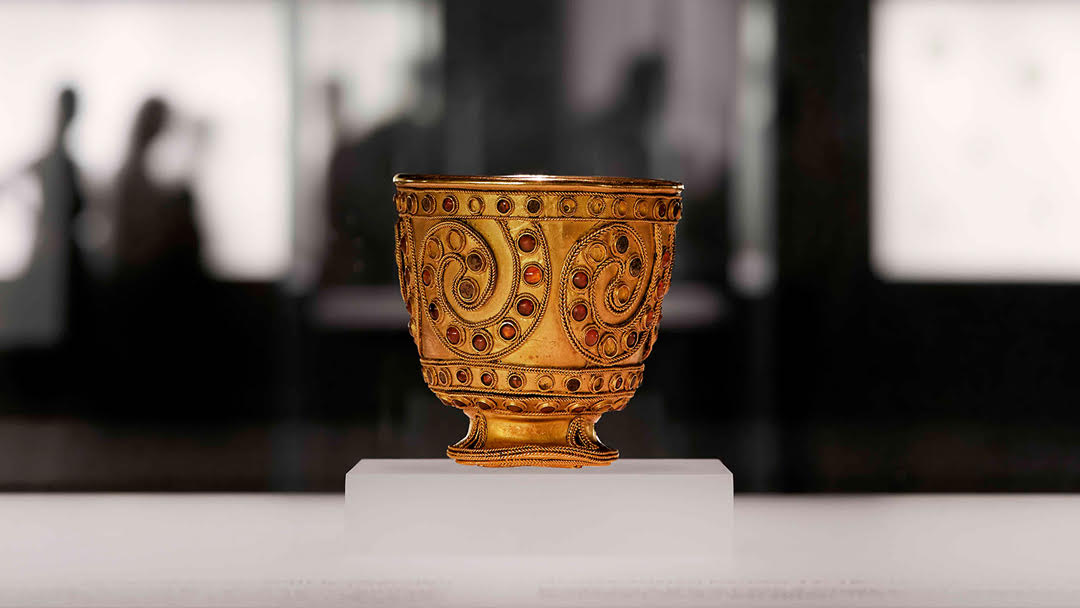 DISCOVER THE TREASURES OF GEORGIA